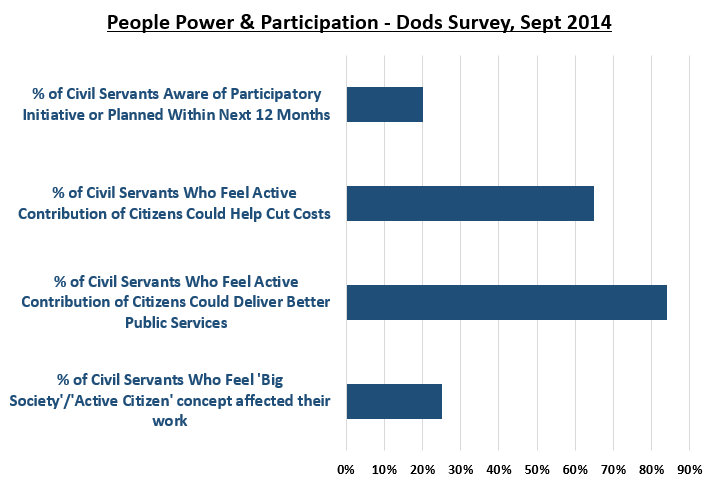 Dods’ survey of 1317 civil servants (Dods Research Survey, Sept 2014) suggests that the overwhelming majority of civil servants recognise the importance of public participation to the creation of, and shaping of public services – with an overwhelming 84% of respondents saying that they felt the active contribution of citizens could help deliver better public services.

But it’s not all sunshine and optimism…interestingly, there’s a slightly lower number of civil servants who feel that active citizenship and participation could help cut costs compared to those who feel the public could help improve public service delivery – only 62% of participants felt that there was potential for citizens to contribute in that respect. And 75% of respondents felt that the concept of the ‘Big Society’ or ‘active citizens’ permeating the narrative of government had not affected their work.

The findings seem broadly positive about civil servants’ attitudes towards the role of public engagement; good news for those who’re looking to ensure engagement translates into impact and value-for-money for decision-makers – it seems the appetite for participation, whatever naysayers might say, is broadly there.

But there are also some contradictions and tensions that emerge from these findings. One of the barriers often identified to embedding participation in decision-making at a government level is a lack of high-level buy in and political will. So it’s surprising (and interesting) to note that a push around active citizenship and the ‘big society’ hasn’t directly affected civil servants’ work according to the findings of this survey.

It is unsurprising, then, that in the same survey, civil servants have said, contrary to what we’d expect, that the key barrier to public participation has been making it easy for members of the public to contribute to decision making; with their suggested solutions including increased opportunities for policy-maker discussions with users and local communities about service design and using digital platforms to improve engagement. Although not explicit within the report, we’d imagine that cost and constrained budgets might have something to do with some of the barriers that exist as well. Might innovation and the deployment of more deliberative models of engagement (both offline and online) – such as public dialogue and citizen’s juries be a potential area for civil servants to explore? That leads us down a slightly different (and just as important) path as public engagement practitioners, prompting questions for us such as; how can participative mechanisms be more flexible, more cost-effective and easier to access for members of the public and policy-makers alike?

The graph above illustrates a mixed bag of results from the survey which are very much open to interpretation –  but they’re still a bag of results with some increasingly promising findings for those of us in the business of advocating for public participation and engagement. So how can we make it easier for civil servants and policymakers to access and to use participatory initiatives and tools? Over to you…