Deliberation as compromise or sell-out? 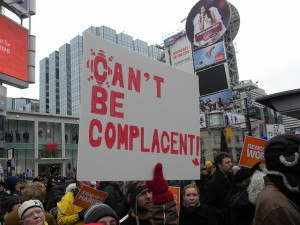 Graham Smith of Westminster University’s Centre for the Study of Democracy gave me the space to think and the source material which stimulated my thinking as I wrote Room for a View. In his blog post responding to its publication, he highlights a significant tension contained within my analysis:

“I worry that some deliberative theorists have become so focused on the systemic level, that they disregard and on occasion accept the existence of non-deliberative practices that can encourage the marginalization and oppression of vulnerable groups – as long as the overall impact is positive for the system as a whole.”

Democracies fail when they are taken over by small groups in power. Every democracy has small groups of powerful people exerting their influence in someway or other. The challenge for democratic reformers is how to rebalance that influence to ensure that those marginalised are more included in important decisions.

In mature democracies this work often requires campaigning, lobbying and advocacy around changing the voting system, strengthening FOI laws or reform of the House of Lords, for example. But it requires more than this too as Room for a View demonstrates.

The work of Involve takes us into government, seeking ways to increase the space within which citizen voice can be heard and acted upon. Government timescales are tight, political challenges from inside and outside parliament acute, and the role of the media in the public space often a real constraint on open dialogue around challenging and controversial issues. Oh, and of course, resources are highly constrained.

In these circumstances compromise is often needed; there are neither the resources nor the time to create a perfectly open space for a wide range of views to be heard and to interact. Our challenge is to make sure that we are only involved in processes that are genuinely deliberative and genuinely involve people not normally involved in a way that ensure that they can have a meaningful impact on any decisions made as a result of the process.

Mahatma Gandhi is quoted as saying:

Graham’s blog post is a helpful reminder to keep challenging ourselves to make sure that we are creating deliberative spaces which are genuinely challenging those with power and are not, in some way, excluding those with the least.