How do we reform our democracy?

Today Involve launches a new publication, Room for a View: Democracy as a Deliberative System. This presents a new and different perspective on the question of democratic reform for the UK: we need to move away from thinking about the representation of individual voters towards the representation of views, perspectives and narratives. This should change the way we approach democratic reform.

We believe that this is a critical time for an examination of this question, not to answer a set of abstract academic questions about the nature of democracy, but because of the real world impact democracy has on the UK and its inhabitants.

The Scottish independence referendum and George Osborne’s announcement of devolution to a number of English cities is evidence of this. Both are significant attempts to reform our democratic system by using elections to shift power from one site of government to another.

However, for all their importance as the ultimate accountability mechanism, elections are flawed. They rarely reveal what voters think clearly enough for elected representatives to act on. Does a vote for a party mean support for its policy on health, the environment or defence? Or merely a preference for the party’s leader? Or something else entirely? As a result, elections provide a poor mechanism for signalling the real views of the public to their elected representatives.

This means that changing the electoral system, or creating new powers to be accessed through success at the ballot box cannot, alone, significantly increase democratic control by citizens.

Room for a View places elections within a much wider understanding of democracy. Drawing on the work of John Dryzek and other democratic theorists, it uses a deliberative systems approach to examine the state of UK democracy.

As the name suggests, this approach takes a systems view of democracy, moving the centre of focus from parliament and Whitehall onto the seven key components of the system. Room for a View describes these seven components and analyses the health, in terms of deliberative capacity, of each in turn: 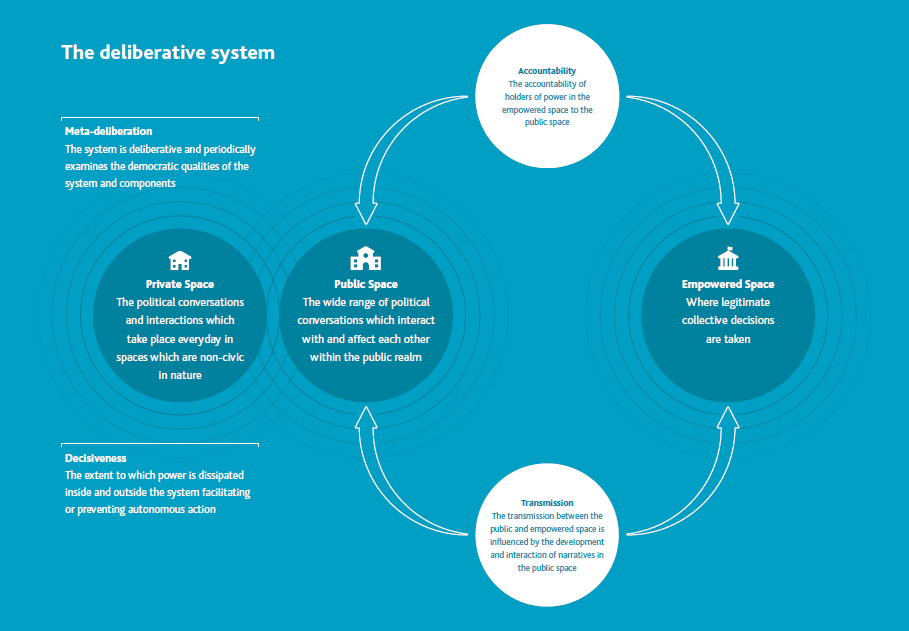 Overall, Room for a View finds that the health of the UK’s democracy is fragile. The representation of alternative views and narratives in all of the UK system’s seven components is poor, the components are weakly connected and, despite some positive signs, matters are in general getting worse. The net effect of this low deliberative capacity is to open the UK system up to increased domination by a small number of special interests, populism and rising distrust.

This blog post is the first in a series of posts by academics and practitioners from across the deliberative system in reaction to Room for a View. We hope the report andthese posts will be the start of a debate about new priorities for democratic reform in the UK.

At Involve we are always interested in opportunities to collaborate. If you would like to discuss any of the themes in the report or possible projects around them, then please get in touch at simon@involve.org.uk or on Twitter @sburall