How should the UK's democracy work?

Citizens' Assembly on Democracy in the UK

Many questions have been raised in recent years about how well democracy is functioning in the UK right now. Public satisfaction with politicians is low, and a sense of alienation from politics is widespread. The responsibilities of parliaments, governments, the courts and the general public for making our democracy work for everyone are being openly contested in the media and within our democratic institutions themselves. In situations like this it is important to hear what the public has to say.

The Citizens’ Assembly on Democracy in the UK was the first UK wide deliberative process to ask the public to consider the future of their democratic system. It brought together 70 people from right across the UK for 6 weekends to explore, online, the big question: How should democracy in the UK work?

The Assembly was convened by the Constitution Unit at University College London (UCL) as part of its wider research project on attitudes to democracy in the UK today, Democracy in the UK after Brexit. The project as a whole, including the Assembly, was funded by the Economic and Social Research Council through its Governance after Brexit programme.

The members of the Assembly were recruited by the Sortition Foundation through a process of civic lottery. Invitation letters were sent to 20,000 addresses in the Royal Mail’s Postcode Address File in August 2021, seeking expressions of interest in being part of the Assembly. From these responses the members were selected to be broadly representative of the UK adult population in terms of age, gender, ethnicity, disability status, level of formal education, place of residence, votes in the 2016 Brexit referendum and 2019 general election, and views on the role of citizens in a democracy.

The Assembly focused on three aspects of democracy in the UK today: 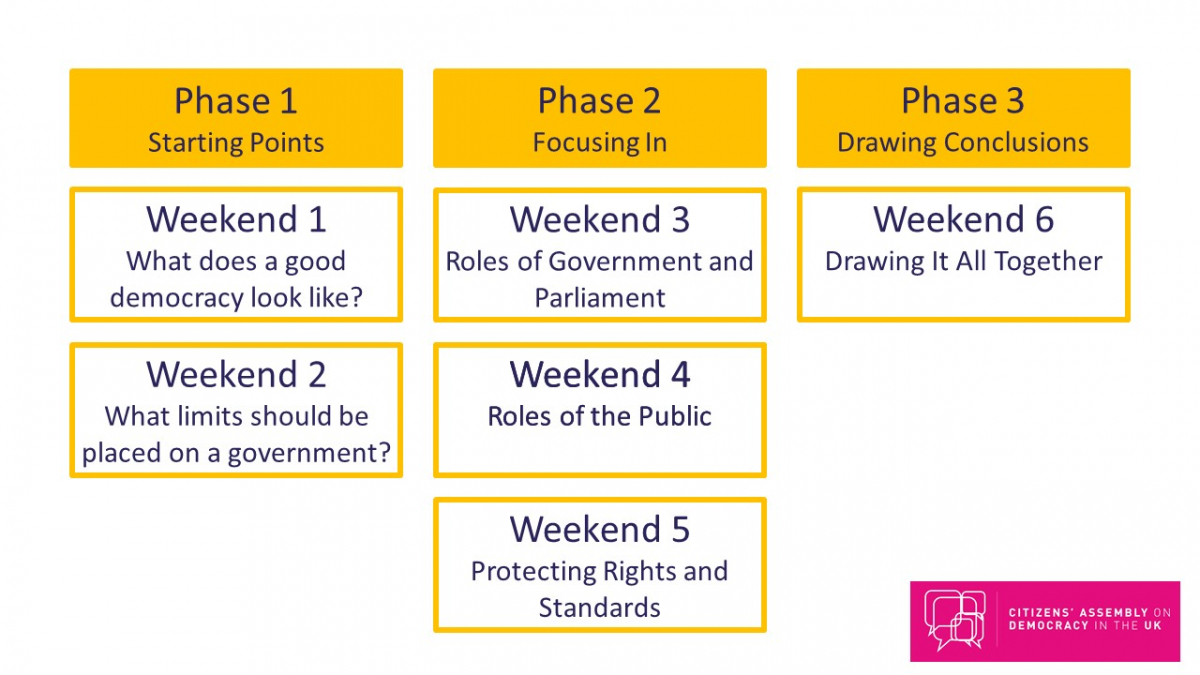 Across the 6 weekends members heard from 27 different speakers, from a wide range of personal and professional backgrounds and presenting a variety of views. Saturday sessions typically consisted of talks from expert witnesses interspersed with small-group discussions when members could reflect on what they had heard and put questions to the speakers. Some talks, particularly in the mornings, sought to set out in balanced terms how the system works and what questions are raised about it. In other talks, particularly in the afternoons, speakers explained their own points of view. Sunday sessions were mostly devoted to deliberation among the members themselves.

Balance in the design of the Assembly and the provision of information was ensured through the project’s Advisory Board, whose members gave detailed feedback on draft plans for every part of the process. Recordings of all of the plenary sessions of the Assembly, including the presentations and Q&As with speakers, are available here. Detailed agendas for each weekend, and any additional briefing materials supplied to members, can also be accessed on this site.

What the Assembly said

In January 2022 a preview of the members’ conclusions was published by the Constitution Unit. It focussed on their overarching statements, as exemplified below, and can be viewed here.

We feel let down by how democracy is working in the UK today because our politicians often show a lack of honesty, openness and integrity. We expect more from them because of their position of power and authority, but currently it feels like ‘do as I say, rather than do as I do’. In a ‘good’ UK democracy the system would be open, honest and transparent and there would be a culture of respect. Politicians would lead by example and be accountable for their actions.

The full report from the Assembly can be found here.

For more information about this Citizens’ Assembly and the wider Constitution Unit project visit their website, or contact either the project’s Principal Investigator, Dr. Alan Renwick (a.renwick@ucl.ac.uk), or the project’s Research Assistant, James Cleaver (j.cleaver@ucl.ac.uk).

Photo by Marcin Nowak on Unsplash