#GE2017: why a hung parliament might be just what the UK needs

Throughout the election voters were told that the UK faces some of its toughest public policy decisions for decades in the shape of Brexit, the looming challenges for the NHS and the growing costs of social care. Conventional wisdom in the UK is that coalitions and hung parliaments are bad for effective decision-making. Should we therefore be worried by the election result and the emergence of a minority Conservative Government? 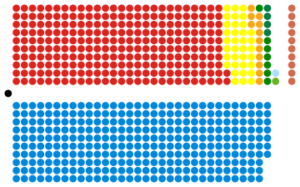 In this post, I argue that the answer to this question is an emphatic no. Governments with a good parliamentary majority are disincentivised from seeking out and taking account of views that are different to their own; they can take decisions relatively quickly, safe in the knowledge that they have the votes in Parliament to get them through. History demonstrates that such governments rarely, if ever, pay more than lip-service to wider perspectives in Parliament or in the country.

Conversely, a government with a small (or no) majority, or that is in coalition, has to take time to build a majority. This requires it to listen to alternative views, make them visible and find a balance between competing interests. As I argue below, this is something the UK sorely needs right now.

I draw this conclusion based on the research and analysis I did as I wrote Room for a View. In that essay, I started by arguing that the votes which people cast in an election tell us next to nothing about their intentions on any particular issue. This idea will expanded on later in this blog series by my colleague Matthew Harriott. I went on to conclude that the ability of a country to take effective democratic decisions is affected by more than how its elections are conducted. While democracies do need free and fair elections, they also need to nurture and grow their deliberative capacity. This can be defined as the extent to which different and competing views and perspectives are publicly visible and interacting within the spaces where democratic decisions are debated and taken.

If you take a non-partisan view of Brexit, social care or the NHS, this view shouldn’t be a surprise.

For example, Brexit will be achieved through fiendishly complicated negotiations requiring multiple trade-offs between access to the single market, the type of border between Northern Ireland and the Republic of Ireland, and the fates of the car, fishing, financial and many other industries.

If you were to pick a single voter from anywhere in the UK and explore these trade-offs, it would soon become apparent that this one voter will gain from some decisions taken during the negotiations and lose from others. The single cross they place on a ballot paper can’t possibly hope to express their preferences in relation to each element of the final Brexit agreement. And that’s just one voter. The Government will in practice need to balance these competing interests across all citizens of the country. Engaging across parties in Parliament as it attempts to develop a consensus will help the government to carry out this balancing act more effectively.

The emergence of the idea of a cross-party commission on Brexit is a recognition of the lack of a majority in Parliament, if not (yet) of the value it will bring. However, a cross-party commission made up of politicians doesn’t go far enough for the challenges posed by Brexit. The decision to leave the EU was put to the whole country. Given our competing interests as highlighted above, the decision about the nature of Brexit must also involve a wide section of the UK population. The government, or the commission if it is established, must therefore take the time to engage the public as the negotiations progress and the decisions about the trade-offs become clearer.

Such public engagement could take many forms, and there is a wealth of experience across the country, not just within Involve, on how it could be done. The Government should tap into this experience now as it is establishing the structures through which it will make decisions.

Public engagement certainly takes time – and in the context of the Article 50 clock ticking down, I can see why people are worried. However, all of Involve’s experience demonstrates that decisions taken in haste are all too often undone when there is a change in senior leadership or government. Conversely, where leaders have decided, or been forced, to take the time needed to build a better understanding of the competing interests, to make these interests visible and to balance them, the decisions they take are more likely to be supported by more people and therefore to ‘stick’.

In this context, a minority government (of any party) could just be the best outcome anyone could have wished for from the vote on the 8th June. However, the vision for democracy I sketch-out above won’t just happen. It requires strong leaders who are able to step outside the old way of doing politics – something which is very difficult to do. We need senior politicians to move away from petty, partisan point scoring. Instead we need them to identify and ask the right questions, then listen and keep listening. It is only by doing this that they can hope to have the interests of the UK public, in all its diversity, at their heart.

Photo: The make-up of the House of Commons after #GE2017