Glimmers of Hope for a New Democracy? 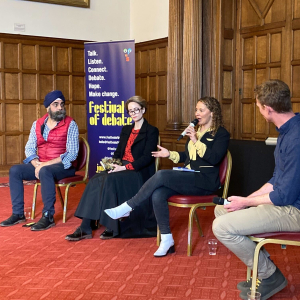 Hardship, and a lack of hope in Darlington

One month ago, I met with people at a food bank in Darlington. A young mum told me she was feeding her and her three children with four chicken nuggets and half a tin of baked beans for dinner. The hardship so many people are facing across the country is real, and something we should feel a deep sense of shame about. But, beyond the hardship, I noticed something almost more concerning – people we spoke to did not believe anything could be different. They thought they simply had to put up with things as they were, and had no power to make things better for them and their loved ones. And, frankly, I worry they are right. Our current system does not support people to work together to improve things, let alone encourage them to truly flourish in a way that befits a modern, 21st century United Kingdom.

Across the country, the story is similar. A recent report by IPPR showed an alarming collapse of public satisfaction in politicians, the current democratic system, and the ability of voters to affect government decisions. The report showed only one in 20 people polled believed voters have the most powerful influence on government decision-making. Is it any wonder people are opting out?

So far, so depressing…

A cause for hope!

Gladly, this isn’t the only story! There is a better way, and there are programmes, movements, organisations and projects all across the UK, addressing the power imbalances and providing small examples of what the future of democracy could look like. Below are a few examples of things that have made me hopeful in recent weeks.

The Poverty Truth Commission (PTC) works to provide a way for those experiencing poverty to be part of decisions that affect them. In West Cheshire, one social housing provider working with PTC reported a 75% reduction in evictions since it moved from a reprimand approach to offering a wellbeing service, a recommendation reached through the project together with residents.

The growth of participatory budgeting is another cause for hope. For example, in Speke, Merseyside, communities took part in a participatory budget process to tackle issues of serious organised crime. A project led by Mutual Gain, ‘Speke Up’, saw 300 local people attend an event to listen to 29 groups pitch for a share of funding. The attendees at the event were able to vote for and decide where that money went and who got the funding. This has now led to 31 new community projects being developed. At the conclusion of the event, the local neighbourhood inspector said that his career has been defined by few key events, and the Speke Up programme was in his top three.

And there are causes for hope at a national level too. For example, a group of national organisations (Power to Change, The Cares Family, New Local, Locality, The Young Foundation and People’s Health Trust) came together just last year to launch the We’re Right Here campaign to get the government to enact a Community Power act, to embed and see a much wider roll out of these initiatives. The project is being led and driven by community leaders, and have had already had some success, such as persuading the Government to include piloting ‘community covenants’ in the Levelling Up White Paper earlier this year, as a way for local people, community organisations and local authorities to come together, share power and make decisions.

And finally, as we launch a new Democracy Network, we already have over 400 organisations and practitioners signed up to work together towards a stronger democracy, working on issues as wide-ranging as electoral reform, diversity of candidates and public participation in major government decisions.

So, let’s look to these green shoots of hope for what a better democracy could look like; a democracy where we have more influence over the decisions that affect our lives, more power and resources to improve our communities, and more ability to elect and hold our politicians and governments to account.