Over the past year, Involve has been working with the Open Government Partnership to develop new Participation and Co-Creation Standards. From this point forward, these will be used by all OGP countries when developing, implementing and monitoring open government action plans. 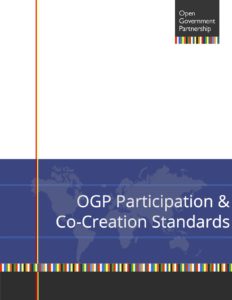 In the post below – written with Paul Maassen from the OGP and first published on the OGP blog – we introduce the new standards and report back on how we took account of the feedback we’ve received.

Last February, the OGP’s Criteria and Standards Subcommittee set the task for the Support Unit and IRM to redraft the OGP’s consultation guidelines. One year later, we are pleased to announce the introduction of the Participation and Co-creation Standards.

These new standards have been developed with three aims in mind:

During their development, the standards have gone through a number of iterations, benefiting from comments and suggestions from Support Unit and IRM colleagues, steering committee members, the International Experts Panel, and you – the OGP community. In this blog post we wanted to report back on what we heard during the public consultation phase, and how your suggestions have been used to create the Participation and Co-creation Standards.

Being clear about purpose

In response, we changed the name to Participation and Co-creation Standards and added more explanatory text to the introduction to clarify their purpose and intended audience. These new standards will be supported by detailed guidance through an updated Points of Contact Manual and an OGP Handbook.

Striking the right balance on ambition and specificity

Striking the right balance on ambition and specificity were two of the biggest challenges in developing the standards. Feedback during the public consultation was mixed, with some expressing concerns that the new requirements were too detailed, potentially making the OGP process too bureaucratic and restrictive. Concerns were raised that good quality processes that were appropriate for a specific country context might receive poor IRM assessments if they did not meet the letter of the standards. On the other hand, others were concerned that the standards left too much room for interpretation, making them difficult to assess and hold a government to account over. Both sets of concerns are legitimate, but point towards very different looking standards.

In response, as far as possible we sought to address both sets of concerns by, on the one hand, adding the potential for governments to present a compelling reason for adopting an alternative approach of a comparable or greater standard, and on the other, working closely with the International Expert Panel to consider the standards wording and measurability.

Getting the assessment right

During the consultation, there were a number of questions about how the IRM would interpret and assess governments against the guidelines. There was concern that the standards would be treated as a straight pass or fail, with countries that missed one requirement being considered in the same way as those that missed many. There was also concern that the assessment should recognise that countries are starting in different places, and therefore track their movement rather than assessing them against an objective scale.

The OGP Support Unit will be designating a subset of the detailed basic requirements as indicators for whether or not a government has acted in line with the OGP process. The IRM and IEP are working on assigning metrics and developing a detailed methodology for the assessment of the standards. This assessment will also describe where a country is using alternative/innovative approaches that are comparable to the standards.

We received many more useful comments and suggestions on the standards, which as far as possible we sought to incorporate into this final version. It is by no means a straightforward job to develop standards such as these, and they will certainly not be perfect, but we hope everyone will recognise them to be a significant improvement. As these new standards get applied we will continue to seek feedback from you, and make improvements where they are needed.

The Support Unit has begun designing and translating the guidelines into Spanish and French, and developing materials to train civil society and government officials in the new standards. We will host a series of webinars in the following weeks, and will reach out to stakeholders in the 30 countries that will be developing an Action Plan in 2017.

This is the an important first step of the Rules of the Game trajectory that we will embark on this year – and for the ambitions laid out in the strategic refresh. Thank you to everyone who has contributed to getting these standards this far, and now we look forward to working with you on the task of transforming them from words on a page to reality across all OGP countries.