The Citizens’ Juries on wind farms in Scotland were designed as a research project to understand how deliberative processes can be used to engage citizens in decision-making. The project was led by researchers from the Universities of Edinburgh and Strathclyde in collaboration with colleagues at University of West of Scotland, Queen Margaret University, Robert Gordon University and Glasgow University.

What problem was it trying to solve?

In light of this the project had two aims

To do this the groups were tasked with answering the question:

“There are strong views on wind farms in Scotland, with some people being strongly opposed, others being strongly in favour and a range of opinions in between. What should be the key principles for deciding about wind farm development, and why?"

How were the locations and participants selected?

The juries were held in three different locations across the country. Each jury was tasked with addressing the same issue, to develop criteria for decision-making on windfarms in Scotland. A total of 47 jurors met in Coldstream, Helensburgh and Aberfeldy and were representative the diversity of the Scottish population.

The locations were chosen as they were of similar size and rural but they each had different exposure to windfarm developments. One was close to an existing windfarm (Aberfeldy), another had a proposal for a nearby windfarm (Helensburgh) and the third had no existing or proposed windfarms (Coldstream).

What was the process?

The project was monitored by a Stewarding Board which including representatives from different organizations with a range of views on windfarm development in the country. The SB was responsible for overseeing the assigned task, the design, locations and the expert speakers.

Each of the three groups, made up of 15-20 people, met over two Saturdays between October 2013 and February 2014. The jurors had 8 hours in total across the two days to discuss the evidence presented to them and to agree on the principles. All three followed the same process which had three distinct phases: 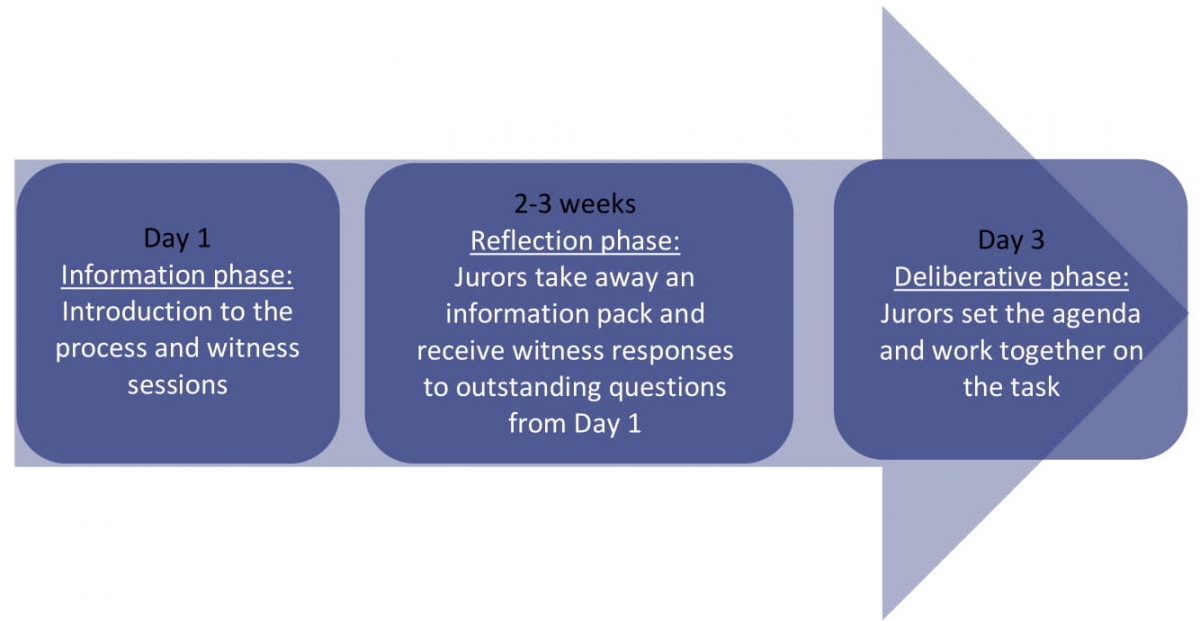 Information Day 1 introduction to the process and the expert speakers

What was the conclusion?

The project produced some key findings on deliberative public engagement in decision-making:

In addition, the jurors came to conclusions about the principles they think should be prioritised for guiding decision-making on windfarms in Scotland. Across all three Juries these can be put into six broad themes

What was the impact?

In evaluating the impact on the jurors, the research showed that they gained knowledge about several aspects of the topic and they revised their views with some becoming more supportive and other more opposed to windfarms following each phase. It also showed that the experience of the deliberative process enhanced the jurors “civic skills, confidence, and sense of self-efficacy” with jurors willing to participate in similar forums in the future. They found that the jurors found the learning phase as the highlight of their experience as this phase informed the jurors and helped them to engage in self-led learning in the interim period between the two Saturdays.

Alongside the results and analysis of the three juries the final report also offers practical advice and outlines key learning for the policy and practice community on how to organise and facilitate deliberative public engagement in decision-making. The research is supportive of deliberative public engagement and states that “When citizens are given the time, resources and support to learn and deliberate together about public issues, they can grasp complex debates and collectively make considered decisions”. They conclude that involving the public in a deliberative process can be valuable for decision-making. However, they explain that the forum’s role needs to be carefully defined and clearly connected to the decision-making processes and representative institutions.